Carrying on the theme of English regions, if it were to be divided into smaller areas than the current official regions, perhaps Devon and Cornwall could be one on their own, equating roughly to the ancient Celtic Kingdom of Dumnonia.

I think the flag is a no-brainer – a combination of the two county flags, but I’ve done a coat of arms too. It combines elements of both county arms, along with, in the crest, a tin mine (once an important industry in both counties), the county flowers (primrose for Devon, Cornish heath for Cornwall) and a coronet representing the semi-autonomous nature of the old Stannary Parliaments in both counties, and the Duchy of Cornwall (which occupies more land in Devon than in Cornwall!)

The flag of Devon and arms of Devon County Council:

In the wake of the Scottish referendum, there’s discussion about a possible federal UK, involving English regions as “states rather than England as a single entity. Based on the current official statistical regions, here’s an idea for the flag and arms of the South West region. It’s the flag of Wessex, but recognizing the distinctiveness of Cornwall by including the bezants on black from the Cornish coat of arms. I dislike the idea of calling it simply “South West England, so how about “Wessex-Kernow (“Kernow is the Cornish for Cornwall)?

And here’s a coat of arms (I haven’t thought about the full achievement yet):

[Update]: I have now put together an idea for a full achievments of arms:

The shield is the Wessex wyvern surrounded by a Cornish border.

I’ve used a peer’s helm (silver with gold bars), on the grounds that regional states deserve a status higher than that of mere local authorities (the City of London also uses a peer’s helm in its arms). The semi-autonomous status is also indicated by the crown in the crest.

The remainder of the crest consists of the Wessex wyvern again, with a collar of Cornwall, but also holding a horseshore from the arms of Gloucestershire. Gloucestershire was ruled by the West Saxons very early on, but for most of the Anglo-Saxon period it was in Mercia, so I thought perhaps it needed a little recognition of its own.

The six county flowers appear in the compartment, along with waves to represent the rich maritime heritage of this long-coastlined region.

I haven’t attempted to come up with a motto! 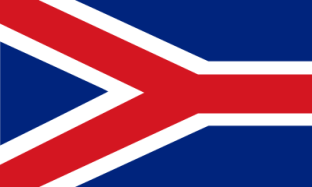 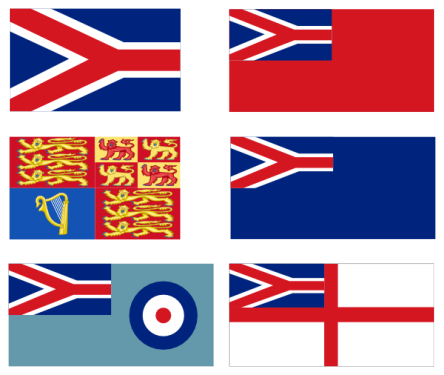 Yet another rUK idea

Something a bit more radical, which works with or without Scotland:

For a single, unified flag for England plus one or more Celtic countries (Scotland, Wales, NI), we could dispense with St.George (who was not English, and never came anywhere near England) and replace his cross with the cross flory from the attributed arms of St. Edward the Confessor and other Saxon kings. Then add a circle in the middle to produce a “Celtic cross flory”.

If all the symbolism is in the design, the colours wouldn’t really matter, but I’ve used the blue and gold of the attributed Saxon kings’ arms, plus one version in the traditional red, white and blue.

The only trouble is that the “Celtic cross flory” looks familiar to me, but I can’t think where from.

Two more weeks to go before we discover whether the UK will need a new flag or not, so unless and until the need goes away, I’ll keep dreaming things up! These keeps all the crosses and their backgrounds intact:

Of course, if Scotland does remain in the UK, there’s still the little matter of getting Wales into the flag.

I’ve just come up with this idea for a UK without Scotland. Trying to keep it simple while representing all three remaining nations (England, Wales, Northern Ireland), I’ve taken my inspiration from South Africa. Here the colours are from the three flags (red and white St.George’s Cross for England, red and white St.Patrick’s Cross for Northern Ireland, and the red, white and green Ddraig Goch flag of Wales), but no specific national symbols are included. The three arms represent the three nations: 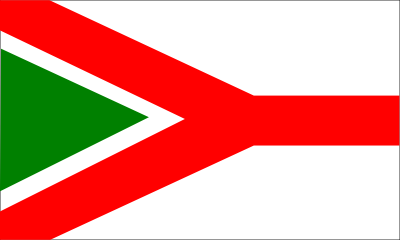 The City of Bristol, in the west of England, straddles two of England’s historic counties – Gloucestershire and Somerset, although the extension into Somerset (south of the River Avon) only occurred in the late 19th century. However, it has been a City and County in its own right since 1373, except for the 22 years between 1974 and 1996 when it was part of the now-departed and unlamented County of Avon.

For centuries, Bristol competed with Norwich for the status of England’s second city, until both were overtaken by rapidly-expanding industrial cities further north (Birmingham, Manchester, Liverpool …). It was a major port, accessing the Atlantic Ocean via the River Avon, which flows through the city and into the Severn Estuary. Bristol has the honour of being the home port of John Cabot, who, in 1497 set sail in his ship The Matthew to become the first European since the Vikings to set foot on the North American mainland. The city also has the dishonour of having been heavily involved in the slave trade, from which much of its wealth emanated.

Bristol has a history of innovative engineering achievements, such as the SS Great Britain, which was the World’s largest ship when it was launched in 1843, and the first screw-propelled, ocean-going, wrought iron ship. The same engineer who designed the Great Britain, Isambard Kingdom Brunel, was also responsible for the Great Western railway which ran from London to Bristol, and for the iconic Clifton Suspension Bridge in the west of the city. In the 20th century, Bristol developed an aircraft industry, producing aircraft for use in both World Wars and later becoming the British centre for the construction and testing of the World’s first supersonic passenger airliner, Concorde. It is now involved in the construction of the Airbus A380, the World’s largest passenger airplane.

The shield of Bristol’s coat of arms dates from the 14th century, and the full arms were granted in 1569. They reflect medieval Bristol’s status as a well-fortified city and a port. These arms now belong to Bristol City Council, and I think I have seen the banner of arms in use by the council.

For a city (as opposed to Council) flag, I opted for simple representations of the city’s maritime and engineering heritage. Maritime activity has to be represented by a ship, as it is in the coat of arms, although I have chosen to use Cabot’s Matthew rather than the medieval vessel in the arms. For engineering and innovation, in the interests of keeping things simple, I opted for nothing more than an inverted arch, indicative of the Clifton Suspension Bridge. The colours – red, white and blue – are from the coat of arms.