Yet another rUK idea

Something a bit more radical, which works with or without Scotland:

For a single, unified flag for England plus one or more Celtic countries (Scotland, Wales, NI), we could dispense with St.George (who was not English, and never came anywhere near England) and replace his cross with the cross flory from the attributed arms of St. Edward the Confessor and other Saxon kings. Then add a circle in the middle to produce a “Celtic cross flory”.

If all the symbolism is in the design, the colours wouldn’t really matter, but I’ve used the blue and gold of the attributed Saxon kings’ arms, plus one version in the traditional red, white and blue. 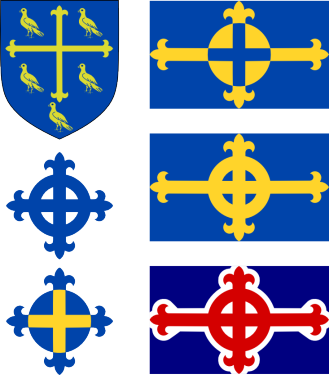 The only trouble is that the “Celtic cross flory” looks familiar to me, but I can’t think where from.

Two more weeks to go before we discover whether the UK will need a new flag or not, so unless and until the need goes away, I’ll keep dreaming things up! These keeps all the crosses and their backgrounds intact:

Of course, if Scotland does remain in the UK, there’s still the little matter of getting Wales into the flag.

I’ve just come up with this idea for a UK without Scotland. Trying to keep it simple while representing all three remaining nations (England, Wales, Northern Ireland), I’ve taken my inspiration from South Africa. Here the colours are from the three flags (red and white St.George’s Cross for England, red and white St.Patrick’s Cross for Northern Ireland, and the red, white and green Ddraig Goch flag of Wales), but no specific national symbols are included. The three arms represent the three nations: